The cost to receive long-term care services at home with a health aide has increased in Rhode Island, according to Genworth’s 13th annual Cost of Care Study.

The cost to receive long-term care services at home with a health aide has increased both in Rhode Island and nationally, according to Genworth’s 13th annual Cost of Care Study.

“Although home care costs are much less expensive than those in facility-based settings, the costs can add up to as much as $57,200 per year in Rhode Island, which is why it’s imperative for consumers to begin planning now for how they will pay for that care should they need it,” Tom McInerney, president and CEO at Genworth, said in a statement.

He said at least 70 percent of Americans over age 65 will need some form of long-term care services and support during their lives. 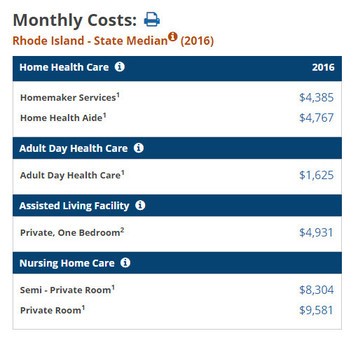 A home health aide will typically help with bathing, dressing, transferring and toileting, but not with catheters or injections. Most agencies also provide homemaker services that typically include assistance with shopping, finances, cooking, errands and transportation. Homemaker services may also be employed for the purpose of providing companionship.

“The annual Cost of Care study is our way of helping Americans fully understand the financial implications of long-term care so that they can plan ahead and, when the time comes, focus on getting the best care without the worry and stress of how they’re going to pay for it,” McInerney said.

The 2016 Cost of Care Survey covers more than 15,000 long-term care providers in 440 regions throughout all 50 states, including all U.S. metropolitan statistical areas.