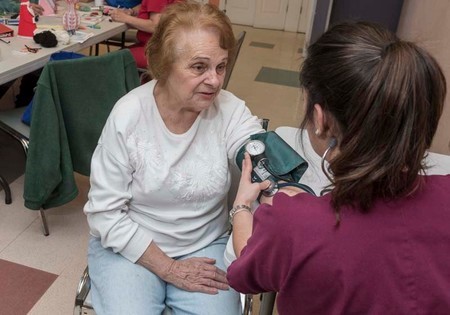 Mary Lou Moran works with the aging population of Rhode Island day in and day out, and understands how the needs of the elderly are changing.

Director of the Leon Mathieu Senior Center in Pawtucket, Moran has observed that as the baby boomer generation ages, they demand more state services, such as transportation, accessible information and social opportunities. She doesn’t think the infrastructure is in place to meet those growing demands.

According to the first-ever Rhode Island 2016 Healthy Aging Data Report, the state has the highest proportion of residents aged 85-plus in the nation. Rhode Island is the second state in the nation to be the subject of the in-depth report on the aging population, after Massachusetts.

Funded by Tufts Health Plan Foundation and conducted by the University of Massachusetts Boston, the report analyzed 120 healthy-aging indicators, such as hypertension and arthritis, breaking down the results by the state’s 39 cities and towns.

Data in this report, said Moran, will be a top resource when creating a more aging-friendly environment for Rhode Islanders.

Of the state’s progress in reinforcing infrastructure needed to improve daily life for the elderly, she said: “Nationwide, we’re probably not ready, so I don’t think Rhode Island is any different.”

But she says the new report, which includes input from Gov. Gina M. Raimondo, House Speaker Nicholas A. Mattiello and Executive Office of Health and Human Services Secretary Elizabeth Roberts, unites the state on a pressing issue, an important first step for Moran.

“I don’t think it’s doable if we stay in separate silos, we need to work together to make Rhode Island age-friendly,” she said.

Elizabeth Dugan, an associate professor of gerontology at UMass Boston and the report’s lead researcher, found that today 20 percent (217,000 people) of the state’s population is aged 60-plus. That number will increase nearly 75 percent, to 264,238, by 2040.

Is the state ready to care for more than 260,000 elderly people? No, Dugan said.

“For the ill or infirm, we don’t have adequate services or supports in place, nor the types of care settings,” she said, noting the additional lack of opportunity for those with more mobility to remain at their homes, in familiar environments.

“We need to re-engineer society to become more age-friendly, and it’s not an easy task,” she said.

Dugan described the aging Rhode Island is experiencing as a “unique demographic transition.” Soon there will be more people aged 65-plus than 5-year-olds, she said.

“It’s natural that there’s a lag between what we need and what’s here. I don’t see it as the sky is falling, I see it as we’re in the middle of adapting to this aging reality,” she said.

What she took away was a positive outlook for the state.

“The number of champions in place to get things done and make changes is a breath of fresh air. I’m really impressed,” said Dugan.

Charles Fogarty, director of the R.I. Division of Elderly Affairs, acknowledged there is work to be done, but said the state was aware of the eventuality spelled out by the report.

“This is a chance for us to build on the successes we’ve had but make sure we are ready for the coming challenges. The system had its foundation in the 1970s and the world has changed since then,” he said.

Fogarty has implemented four-year plans, produced in accordance with the Older American Act, focusing on the services provided to the elderly by the state. The most recent plan was approved in September 2015 and is effective until Sept. 30, 2019.

It found that the state’s 65-plus population accounted for 27 percent, or $484 million, of the fiscal 2013 Medicaid spending, which is 30 percent of the state budget.

Facing a growing population and increased demand for already short resources, Fogarty said such reports cannot be ignored and should serve as “the impetus to help us transform our system.”

The original article published by the Providence Business News can be found HERE.

Need to discuss how this news about elder services impacts you or a loved one? Need to plan out what the cost for elder services are and how you can plan for them? Contact our office for a free consultation.