R.I. 10th most expensive nursing home costs in the U.S.

Rhode Island has the 10th highest nursing home costs in the nation at an average of $94,170 annually, according to Caregiverlist’s August report.

Caregiverlist Inc., which connects seniors and professional caregivers with eldercare options, said Rhode Island bumped Maine for having the 10th most expensive costs in the country. Rankings were based on the daily prices of shared rooms in nursing homes. 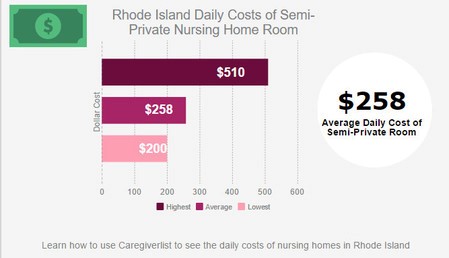 Rhode Island’s average daily shared room cost also is lower than that of Connecticut and Massachusetts, where average daily costs of semi-private rooms total $321 and $289, respectively.

It said the cost of rooms at Briarcliffe are slightly higher than the average Rhode Island nursing home at $325 and $300, for single and double rooms, respectively, but are not the costliest in the state.

This story was written by Lori Stabile and published by the Providence Business News on August 9, 2016 www.pbn.com.

Concerned with protecting your life savings from the high costs of nursing homes in Rhode Island?

Learn about the options available. Contact our office for a no-cost consultation to discuss what steps you must take now before it is too late.